Born May 20, 1920 in Centralia, Washington, Eskaton Lodge Gold River resident Pete Coleman spent his childhood in several different towns, though he will eagerly tell you his first and fondest memories are of Bend, Oregon. Graduating from high school in Sebastopol, CA, Pete was drafted into the service just a few short years later in November 1941. Trained as an aircraft mechanic, Pete served in the Army Air Corps with the 92nd Fighter Squadron in North Africa, Sicily, Italy, and China. After the war, Pete returned to Sebastopol, where he started work as a cabinet maker. Thanks to some neighborly matchmaking, he married the girl next door, Alice Elaine McIntyre, in 1948 and they were blessed with three daughters. Their three children, six grandchildren, and six great-grandchildren remain their greatest pleasure.

Always a talented craftsman, Pete opened “Coleman’s Cabinet Shop” in the early 1960s, where he built and installed high-quality cabinets throughout the region. After retirement, Pete and Alice Elaine enjoyed traveling in their fifth-wheel trailer, camping and fishing their way across the States. Pete always loved to read and had a famously-excellent memory. In his later years, Pete began to write, producing several stories as well as an autobiography, which includes this quote: “Now that I am the last of the family, I must reminisce as old men are allowed to do. At this age, I give thanks to my wife for all the help and consideration over the years. Our three girls are a joy and the six grandchildren have grown (and now four great-grandchildren). This all adds up to ‘It’s a wonderful life.”

To celebrate his 100th birthday, Pete’s family reached out to their family, 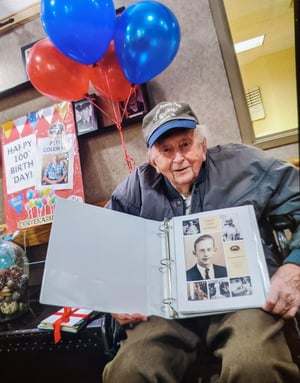 distant relatives, and friends to create a message book for him. The book shown in the photo is a collection of pictures and messages from friends and family wishing Pete a wonderful birthday and sharing stories of fun times from the past. Pete can now read through the book and see old photos from when he was a boy playing in the snow, or photos of his great-grandchildren holding signs that send their love and wish him well. When Pete looked at the cover of his book, he pointed to a photo of him as a baby and said, “Can you believe I used to look like that!”

Pete and Alice Elaine happily moved to Eskaton Gold River in July 2018. Pete enjoys living on the ground floor, talking with other residents during meals in the dining room, and taking naps. On the day of his 100th birthday, Pete’s family and Eskaton staff sang him “Happy Birthday” and celebrated the special day together.

Please join all of us in the Eskaton family in wishing Pete the very best on this incredibly special occasion!