Longevity is not uncommon at regional senior living provider, Eskaton. Of the 2100 employees that work at Eskaton, almost 900 (43%) have been with the company for more than five years, including 126 who have worked with the organization for 20 years or more. For Cindy Powell, celebrating her 50th work anniversary with Eskaton is an "honor and privilege," she says. She began working at age 17 with a work permit from locally-based Foothill High School where she was enrolled in the Regional Occupational Program (ROP). She graduated high school on a Friday and reported to work on Monday and has been with the organization ever since.

Eskaton owned American River Hospital in 1972 when Cindy was hired in the data services department working on a table-sized posting machine, and in accounts receivable posting ledgers, charges and reconciliation.  She also managed the hospital's pneumatic tube system that delivered messages throughout the hospital; she describes this as "today's version of email." She says "data services was not considered valuable at the time, but today, data and technology is extremely valued." 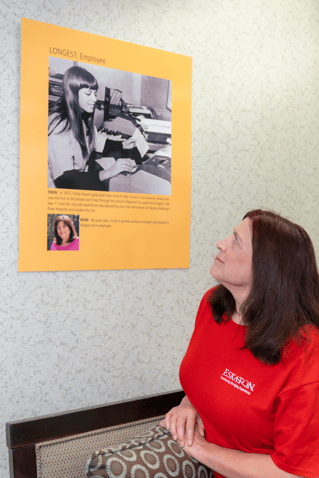 Cindy has experienced a full circle of life with Eskaton, with one of the previous Eskaton CEO's conducting her wedding ceremony, to delivering both of her children at Eskaton's American River Hospital. Later in her life, she recalls the care her grandfather, father and husband received when they were ill and passed away at Eskaton's care centers.

"Working alongside positive, dedicated and loyal people at Eskaton has enriched my life," she says," and I would describe my experience at Eskaton as one of "family, love and appreciation."

"Cindy has devoted her life to service and has seen much change over Eskaton's 54+ years, from operating hospitals to expanding senior housing and services across Northern California," CEO Todd Murch said. "I have the highest admiration for Cindy's accomplishment.  Seeing an individual stay with one organization for 50 years is something that occurs very infrequently, and we are all glad that Cindy is not done yet!"

Eskaton has been serving older adults in Northern California since 1968. As a nonprofit senior living provider, our mission is to enhance the lives of older adults through innovative health, housing and social services. With five decades of experience and a national reputation for innovation, Eskaton is Transforming the Aging Experience. For more information, please call 1-866-ESKATON, or visit eskaton.org.