Through the generous donations of residents, families and community members, Eskaton is fulfilling our mission of improving the lives of at-risk elders by providing housing and social services that connect, uplift and sustain them, wherever they might call home.

Longer lifespans mean that some older adults may outlive their resources, so Eskaton’s Resident Assistance Fund offers a sense of security by providing funds to bridge the gap for residents that have lived with Eskaton for years and, through no fault of their own, depleted their savings and need supplemental financial support to pay for their accommodations and care. All monetary support from the fund goes directly to helping qualifying residents stay in their Eskaton residences.

Meet Bruno, a recipient of the Resident Assistance Fund. Bruno has 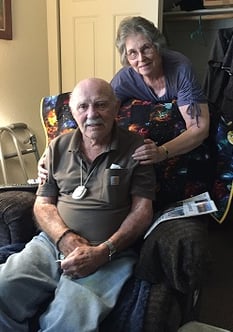 been a resident at Eskaton Lodge Cameron Park since September of 2007. Born in British Columbia, 94-year-old Bruno came to the United States and became a citizen just after the conclusion of World War II. Working as a miner for the state of California for several years, Bruno was an integral part of dam and reservoir projects in the region. Later in life, he worked for California’s oldest newspaper, The Mountain Democrat, for thirteen years. Happily married to his wife, Marion, for over two wonderful decades, their daughters Melanie and Dixie still reside in the area.

Over the past 13 years, he has come to consider Eskaton Lodge Cameron Park as his home among friends and caring staff. He enjoys joining in all the games and reading, and is well known at his community for his quick wit and sense of humor. When it became evident that Bruno would be unable to continue fully paying for his care, Eskaton responded to the need by supplementing his costs through the Resident Assistance Fund, supported by contributions from fellow residents, families and donators throughout Eskaton.

“We are truly thankful to Eskaton and all of the supporters of the Eskaton Resident Assistance Fund for providing the security and life enhancing experience that all of our older citizens deserve.” –Bruno’s stepdaughter, Dixie.

Please consider making a generous donation to this fund to continue helping residents like Bruno.