Have you ever confronted a leaky toilet or faulty tub and felt utterly hopeless? Before you reach for the phone to call your local plumber, consider fixing it yourself, with a plumbing manual written by Eskaton Hayfork Manor resident Peter Hemp.

Before coming to Hayfork Manor eight years ago, 72-year-old Hemp was an avid cyclist who enjoyed living in a rustic cabin. But canoeing and hiking to and fro eventually wore him down. After visiting the Eskaton community with his 98 year old mother who was interested in the property, Hemp was intrigued by the quaintness and proximity to the Trinity River. His mother decided to move to the East Coast, but Peter found his place at Hayfork Manor. 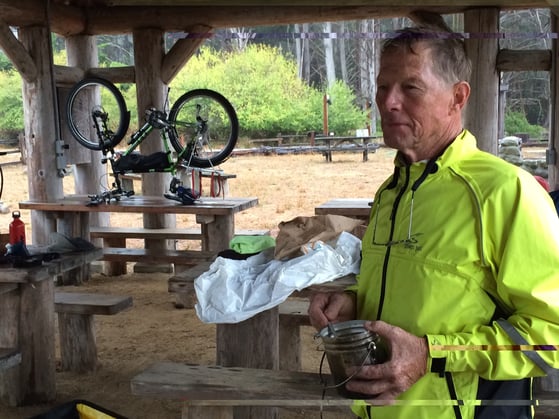 Even though he’s retired, Peter still finds time to draw back on his former career: Plumbing. Peter initially wanted to join his father’s art firm, but found himself working with plumbers in high school, and took up the profession to support his growing family. While living in Berkeley and making a nice steady income, Hemp noticed something that bothered him. Frequently, he would be called upon by single mothers to fix something, only to see them appear disappointed and heartbroken they could not afford his services. So Hemp decided to do something to help them.

He wrote a small pamphlet called The Straight Poop, which was sort of a plumbing cookbook. After giving it to people in need, he noticed the product had potential buying power, and sold it in a local Berkeley store. It wasn’t long before Hemp was fielding calls from publishers asking for rights to distribute the pamphlet, and after 10 years, Hemp was asked to write an entire book. He wrote Plumbing a House, which was sold in home improvement stores like Home Depot. Reviewers on Amazon call it a “bible for plumbing” and a “good book for beginner plumbers”.

As great as the book is, new developments in plumbing in the past few decades have made it necessary to add some updates to his first edition. Peter got work adding information on new technology like PEX. The new portions will be colorized, and although the updated form will only be available as an e-book until it sells enough to warrant a print version, he isn’t concerned about money. “I want to raise the bar,” Hemp said.

When he’s not writing best-selling books, Hemp is cycling along the river by his home. He suffered injuries from a car accident that derailed his annual six month trek across America, but he’s hoping to get back in the game. Until then, he’s enjoying his retirement, in which he consults his son and other active plumbers from the comfort of his Hayfork home. He hopes to visit England, especially Bath, a “plumber’s Holy Grail”. And he has advice for others: read The Power of Now, by Eckhart Tolle, and live in the moment. Spoken like an expert!