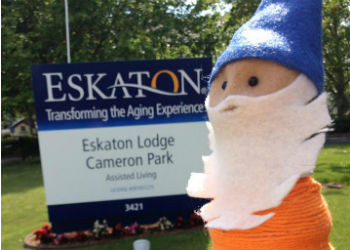 Sacramento, CA (Aug 2017) -- Eskaton hosts an annual Open House & Gnome celebration in honor of the volunteers who bring joy to the lives of the seniors who call Eskaton Lodge Cameron Park home.  This free event will take place at 3421 Palmer Dr., Cameron Park, CA 95682, on Thursday, August 24thand will begin at 5 p.m.

“The Eskaton Traveling Gnome Project is designed to bring together volunteers and seniors to encourage interaction and social well-being,” said Carly Amatisto, Eskaton activity director. “We started this project as a way to connect our residents with the community.” Amatisto partners volunteers with residents based on what geographic regions the resident is interested in visiting. “Although many of our residents no longer vacation in the summer, they are still interested in learning about new places. Our volunteers bring back photos of the Gnomes visiting locations around the world,” said Amatisto.

Each senior is involved in making their own gnome and naming it. During the “Gnome Coming”, residents learn about where their gnomes went and each receives a photo album of the travels.

In 2014, Leroy the Gnome was deployed over Afghanistan with the Air Force Reserves on a refueling plane and participated in several missions. In 2015, Winton the Gnome traveled to Alaska, satisfying a lifelong goal of an Eskaton resident who was not able to complete all 50 states. In 2016, Suzie the Gnome traveled over 24,901 miles around the globe with her volunteer travel partner. She visited Thailand, Australia and New Zealand.

“This year, it looks like Morris the Gnome will win the title of ‘Globe Circumnavigator,’” noted Amatisto. “To date, Morris has traveled 21,137.12 miles through Kathmandu, Iceland and Ecuador, and he’s not home yet.” 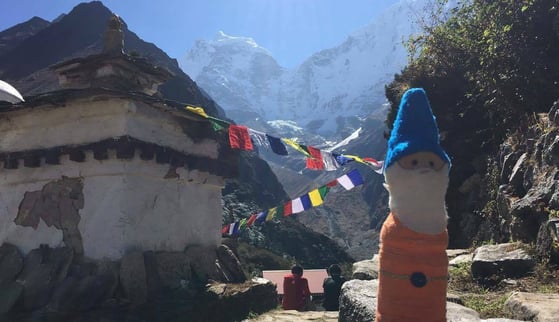