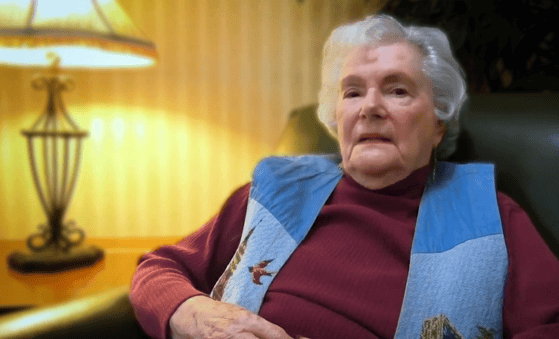 "How old would you be if you didn't know how old you are?" – Satchel Paige

“Statistically, I am 95 years old,” said Jean Humburg. “But that does not clarify who I am.”

Jean recently had the privilege to be a part of a group of residents from Eskaton who met with graduating students from the Sierra Academy of Expeditionary Learning (SAEL). They were together every Thursday for eight weeks. During that time, they learned to understand who they were in the eyes of each other.

In a letter the students wrote to Jean after the experience, they expressed how intimidated and judgmental they expected to feel spending time with an elder and how their concept totally changed. “In my letter to them, I told them that they brought a different perspective to what I imagined teens of this era are experiencing.” She added that programs like these are just one of the reasons she has found Eskaton the right choice for her.

Jean lived in a 3,600 square foot home in Lake Wildwood when her husband passed away in December 2011. Her daughter and son-in law who were living in Panama had returned earlier that year to help with his care.

For several years after her husband’s death, Jean tried various ways to stay in place but none proved satisfactory. “After my 90th birthday, I concluded that I would seek a solution that would be agreeable to me and my family,” Jean added. “I chose Eskaton as being the answer to meet all my needs.” In January 2015, she moved into a beautifully situated apartment with her adorable five-pound Pomeranian, Sasha.

Since moving to Eskaton Village Grass Valley, instead of her activities being curtailed, she finds herself making choices every day from the weekly calendar.

“I can select from bridge, bingo, Mexican Train, movies, musical entertainment, Jeopardy, Great Courses, to name a few,” she added. “Planned outings are offered via our air-conditioned bus, and we are accompanied by an experienced driver and an informative guide.” Jean has lived in Nevada County for 20 years, and she enjoys rides through the downtown area and neighborhoods to view the new additions and appreciates the established icons.

Connecting with others and engaging in social engagements is important for Jean, “Making new friends and cherishing the established ones is one of the highlights of living here. The spacious, airy dining room is where most of that takes place.” Jean continued, she and her friends meet there three times a day to catch up on news, share current aches and pains, cheer each others' progress, greet neighbors and check up on absentees, all while enjoying a variety of well-prepared choices from the menu.

After many months of chatting and having fun with those she shared meals with, Jean wanted to know more deeply about their backgrounds and their history. Being a writer, Jean decide to interview five of her friends. She created a booklet called The Ladies of Table 16, recording their remarkable lives. Two were 100 year olds whose families migrated from Germany and Ireland and whose grandfathers came here for the California Gold Rush; one woman, in her mid-90s, was a WAVE in WWII; another, in her 80s, was a nurse, as was her mother and sister. There was also a woman who was adopted as an infant and never knew her biological mother. Jean’s father came to Ellis Island in 1905 from Hungary as a young man. All the ladies of table 16 raised families and still had fulfilling careers.

“We are all walking historians,” said Jean.

“Old is very different now as it is evident in Eskaton,” Jean explains. “You'll find inquisitiveness, humor, strength, creativity, intelligence and courage. Living under one roof creates sorority, fraternity, and community designed to meet the challenges together and prosper.”