Ninety-nine year-old Clea Meyers can be seen walking around Eskaton Village Carmichael with her pedometer clipped on. She recently joined the Eskaton Step It Up program and committed to walking 7,000 steps per day – which she has no problem achieving.

Clea said good food, good exercise and attitude are the secrets to living a long and healthy life. She explained, “It’s about having a positive attitude and caring for others.” During her nearly 100 years on earth, she has practiced what she preaches. About 15 years ago, she began knitting hats for children in the hospital. 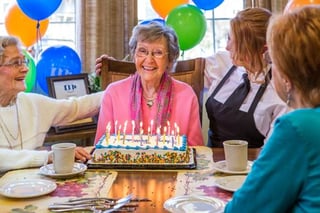 The mother of two, grandmother of five, and great-grandma to nine, grew up in Nebraska. She met her husband there, they were both in education. She worked as a teacher and he as a principal. In 1959, after visiting her sister and brother-in-law in Sacramento, the couple decided to move out west. “It was so nice to get out of the snow and ice,” said Clea. “And the teacher salaries we so much better in California.”

Clea spent 20 years teaching second grade at Peter Shields Elementary in Rancho Cordova. She loved teaching. The greatest part was “opening their eyes to the world and seeing them grasp and grow into adults.”

Clea is proud to be a resident at Eskaton Village Carmichael since 1997. “Absolutely the best place one can live,” she exclaimed. “The food is so good.” Over the last week, she has been invited to lots of birthday dinner parties.